Allow me to (re)Introduce Myself 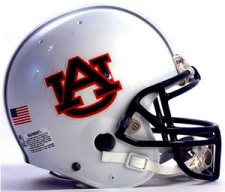 Obviously former offensive coordinator Tony Franklin was not the problem. After Tommy Tuberville sacked Franklin, the Tigers proceeded to take it on the chin against lowly Arkansas, 25-22. Ouch.

Last night Auburn lost to West Virginia 34-17. It is bad enough that they lost to a Big East team (WTF is that conference worth anyway), which makes the SEC look bad, but it is the way the Tigers lost. Up 17-10 at the half, Auburn decided to give up 24 unanswered points in the second half. Seems like a total ass kicking to me; not even sure how Tuberville can put a decent spin on this one.  The most disappointing stat for Auburn fans has to be 204 total yards punting. Good grief.

Auburn is now 4-4 and looks to somehow salvage their season with a 7 wins an a minor bowl invitation, but it is not going to be easy with games remaining at Mississippi, Tennessee-Martin, Georgia, and at Alabama. Ole Miss is not as shitty as usual (they did beat the Gators), Tennessee-Martin will be a nice scrimmage, Georgia is far too strong to fall into a Tiger trap, and this is finally the year that the Tide will Roll over Auburn.

Auburn fans, can you say hello to a 6-6 season? I thought you could. I am not sure if Tuberville can escape this mess, which is too bad because the man seems like a quality person and a great coach. These days, its too bad one down year gets you ran out of town.