NCAA Football 09 (The no update, update) 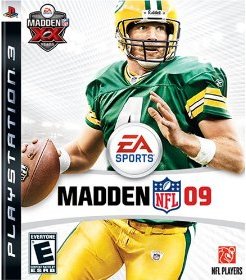 gameshark, courtesy of William Abner, posted some E3 Madden 09 impressions. Fairly detailed for a quick 15 minute session, but it sounds like Mr. Abner did not have enough time to really hit on gameplay issues/concerns.

A skeptical gamer will expect updated rosters, maybe some updated graphics, and a few new non-gameplay related features.  Contrary to popular opinion, the gameplay does change each year; minor tweaks and the like, but not always obvious changes from year-to-year.  At the end of the day, each release of Madden is at its core, still Madden.

Now that EA has exclusive rights to release NFL games, the pressure seems to be off EA to make leaps in gameplay.  Years ago when EA had to go up against Sony’s GameDay serious, and more recently the 2K games, EA had to innovate.

Fast forward to this year’s game.  Of note are the new Rewind, Backtrack, and Madden IQ (score) features.

All of this is tied back to the new Madden IQ score. This is another feature you can completely disable but this new rating is basically your Madden Aptitude rating. When you first fire up the game you are presented with a series of holographic tests and drills from running, throwing, tackling, playing pass defense, etc. When you’re done John Madden reveals your Madden IQ. This is further broken down by area: you might score highly in running but poorly in passing, or you might be rated highly in run defense but terrible at stopping the pass. Based on your IQ the game will tweak settings accordingly. It’s like your own custom set of gameplay sliders. Again, this is an optional feature and we’ll have to see how well it works after we get a deeper look into it.

I bet I would score really low with my Madden IQ. Not because I do not understand football, but because I am not much of a joystick jockey (is that term even valid anymore). Dexterity challenged gamers should find the new Rewind feature quite useful.

The Backtrack feature is going to be neat for those of us that like to “breakdown” plays. The Madden 09 developers better not have the same issues exposed in replays that are present in NCAA Football 09. Talking about frustrating the snot out of gamers; EA could be setting up from some serious backlash if the Backtrack feature exposes holes in Madden’s gameplay.

I am going to get Madden, as I have each year for as long as I can remember, but at least it sounds like Madden is going to offer a different (hopefully better) experience this year. For the past four or five years, I have only played Madden for 2-3 weeks before quickly throwing it up on eBay. Hopefully this year I will get better value for my money.