Falcons impressive on offense against the Rams. 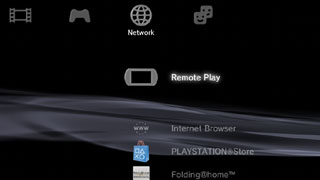 At the risk of this becoming a Remote Play sucks theme weekend, I still have a few comments to post on the subject, and undoubtedly will have a few more before the day is done. Friday night and Saturday morning everything with my Remote Play setup was working great. As I posted Saturday morning, I had high hopes that the new firmware updates would help me finally lick this problem once and for all. Not so much.

Saturday morning I took my PSP outside of my home network, to the nearest free open access wireless network I could find. I fully expected to connect to my PS3, but all I managed to get for my efforts was an ominous Time Out message.

After returning home I attempted to connect to the PS3; this is where the story gets strange. I got a couple of Time Out messages, but finally connected. Just for shits and giggles, I attempted a few more times, but could not connect. When I attempted to connect via the Private Network option, I could connect every time. Something is amiss, which is the reason for the previous “PS3 PSP Remote Play Black Magic” posts.

At this point desperation (or maybe depression) sat in. I decided to start fiddling with my router connections again. The reality is that I should not have to change anything; I had already managed to establish internet connectivity. The truth is that I only had connectivity from inside my home network, which means that there must be something setup incorrectly on my router.

I spent several hours changing settings – I disabled UPnP on the router, and the PS3, and tried combinations of enabling and disabling UPnP. I put the PS3 in a DMZ with a static IP and I took the PS3 out of the DMZ. I tried switching back  and forth between a static IP and a dynamic IP, before settling back to a static IP, which is where I started. I setup port forwarding (9293) for UDP, TCP, and combinations of both settings. I turned on port triggering, etc. The reality is that I should not have to have port forwarding (and the rest) if I have the PS3 in a DMZ. Forget the fact that I should not have to have the PS3 in a DMZ, but I digress.

During the plethora of changes, I decided to move PS3’s static IP address outside my allocated DHCP range. It makes sense that it should be in order to prevent an IP address from being assigned twice, but I have never ran into colliding IPs on my network because of limited devices (and the PS3 was fairly far back in the assignment list).

While I was testing various changes, I thought I had Remote Play working again, at least good enough to try an outside network, but I hit the same problem I experienced several months ago. My PS3 started randomly turning itself on, which means that it will disable Remote Play start if connectivity is established in a short period of time. Not sure which one of my changes triggered this response, but it must mean that the new firmware updates did not resolve this issue. Monkey nuts!

After reverting back to my original settings (only exception was a different static IP address for the PS3), things looked to be in working order, so I called it a night.

“A connection error has occurred. The connection to the PS3 system has timed out.”

Next I selected the Private Network option, but received the Time Out error message. The difference this time was that the PS3 actually turned out, so I attempted to connect again, but received the Time Out message again. Since the PS3 was still on, I tried again, and this time established a connection. The connection was so poor, that the PSP disconnected. When I attempted to connect once again I received

The PS3 is still on, my network connectivity is excellent, so I am not sure what is a play. I connected again, quickly established a connection, but just as quickly got disconnected.

Back to network settings and router black magic. At least I now know why Sony is not marketing Remote Play. Great concept, but clearly not ready for the masses.