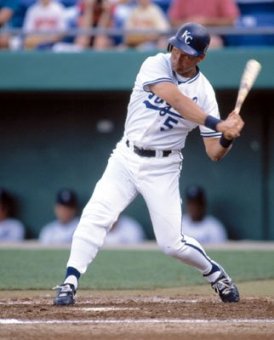 George Brett is my all time favorite baseball player. Ever. Period. End of story.

Today is the 25th anniversary of the Pine Tar Game

It was the famed Pine Tar Game — Royals against the Yankees — and Thursday marks its 25th anniversary. Brett says he can’t count the number of times that he has seen the famous clip, but says “I have the game on tape, I watch it once a year with my boys. They don’t want to watch the whole game, they just like to watch the aftermath when the umpire calls me out. When I first saw the replay, I had no idea what I had done. I said, ‘You’ve got to be s——- me. I did that in public?’ [Former manager] Earl Weaver said he didn’t know what he was doing when he went out to argue a call. I had no idea what I was doing. When I looked at the replay, I was pretty amazed that I’d gotten that angry.”