The Long Delayed Road To Nowhere 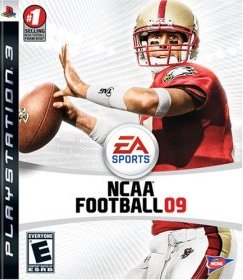 Nothing really significant to post on the gameplay front because I have only played one game.

First of all, I think this year’s game is better in every way compared to last year: gameplay, pace of game, controls, menu system, everything. With that said, my next impression is that the game pisses me off as soon as I start to break down plays by watching instant replay.

For my first game was Texas Tech vs. Georgia (me, of course). I wanted an all red and black game. Georgia is ranked number one, and rated 99 across the board. Are you kidding me? They are going to be good, but not that good. EA Sports was also kind of enough to put in the now famous black jerseys. Cool beans!

I played the game on all default settings, with 4 minute quarters. Please, no comments on how much I suck.

I could not get a running game going; Knowshon Moreno only had 22 yards on 10 attempts. Matthew Stafford completed 76% of his passes, with two TDs and 1 INT (my fault; threw into triple coverage). Unfortunately the CPU completed 75% of their passes, but did not even bother to run the ball (5 total attempts). No other turnovers, but my defensive players dropped two sure-fire interceptions. Disappointing, but it may be a better alternative than too many turnovers.

I recently wrote that I was not going to go off on to a tangent of looking for every little thing wrong with the game (i.e. nitpicking, reviewing the game, etc). Instead I was just going to concentrate on fun factor. OK, I suck. I cannot help myself. I love football games, and a big part of it is how the AI performs. I have to look at the replays to see how the CPU reacts to plays, my movements, etc.

I am sure there will be other complaints as I continue to breakdown the game, but if I can remember to put fun factor first, hopefully the game will not completely piss me off.

Late last night (or early this morning depending on your perspective and time zone) I also made the mistake of starting to look at messageboards. I could not help myself. I am 100% convinced that the majority of players would not find most of the stuff that is currently being posted by a handful of gamers. In other words, I bet that 2% of the gamers (messageboard posters) find 95% of the issues, but everyone piles on with how much the game sucks, how EA should have better quality control, etc. NCAA Football fans are clearly passionate.