WKC:I – Inside the Review Scores

Believe in the Falcons. Fear the defense. 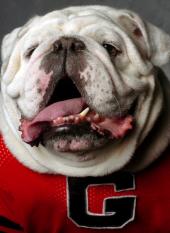 Uga VI passed away last night, bringing to an end a most remarkable career as Georgia’s top Dawg.

Damon Evans, UGA athletics director, bestowed the highest praise on the beast that he could Saturday, in a statement:

As an addendum, Part 2 if you will, the Columbus Ledger-Enquirer has an interesting bit on Uga’s Columbus connection. For those keeping score at home, the current Uga line began Dec 2, 1955 in Columbus, GA with the birth of Uga I.